This season had a series of warm spells separated by normal autumn temperatures. The warmest, about 4° above normal, came in early March, late April and late May. Dry air came at cooler times, near the 1st of March and the 12th of April. Most of the rain came in two very wet days: the 30th of March and the 4th of May (61 mm).

As in 2018 and 2016, autumn was very warm. Although autumn 2016 had the highest mean temperature of the new century, this autumn had the warmest nights: 12.7°.
Despite the on-going drought, measures of moisture were near normal for the season. Cloudy days reached 37%, the daily temperature range (14.3°) was quite narrow, and the early morning dew point (7.2°) not low. The rainfall total, 117 mm (est.), was at the median value, not far below the mean of 134 mm.

Data. A Bureau of Meteorology automatic rain gauge operates in the museum yard. From 17 March 2017, 9 am daily readings are published as Manilla Museum, Station 55312.  These reports use that rainfall data when it is available. Station 55312 recorded no readings this autumn. I used my own readings for the whole season.

The air became four degrees warmer than normal by day and by night in mid-March and continued warm until late in April. As normal temperatures returned the climate became dry, with no rain for thirty-nine days.

All four indicators of moisture (rainfall, dew point, cloud, and daily temperature range) agree in showing this autumn to be drier than last autumn, and even than the three autumns before that.
The total rainfall of 45 mm was the 12th driest on record, but it was not the driest in the 21st century. Similarly dry autumns occurred in 2002 (60 mm), 2005 (35 mm), 2006 (53 mm), and 2008 (37 mm). That is about twice as many as history would suggest.

Data. A Bureau of Meteorology automatic rain gauge operates in the museum yard. From 17 March 2017, 9 am daily readings are published as Manilla Museum, Station 55312.  These reports use that rainfall data when it is available. During this autumn season 30 daily readings were missed, and I replaced them with my own readings.

Autumn this year had normal temperatures, in stark contrast to very high temperatures both in the summer and in the autumn of last year. The decline to winter was not smooth, however, but went by steps. For three weeks in each month there was no cooling then, after some rain, there was a sudden cooling through three, four, or five degrees.
Rain fell frequently except for two gaps of a fortnight each, the first coming in mid-April. The second ended with 32.8 mm of rain registered on May the 20th. There were 26 rain days, which is twice usual number, and more than in any autumn in the new century.

Data. A Bureau of Meteorology automatic rain gauge operates in the museum yard. From 17 March 2017, 9 am daily readings are published as Manilla Museum, Station 55312.  These reports use that rainfall data when it is available. All other data, including subsoil at 750 mm, are from 3 Monash Street, Manilla. 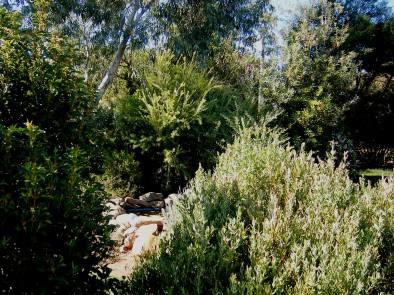 The season was marked by a series of warm spells. The three warmest, coming early in each month, reached 3° to 4° above normal. In the first two, days and nights were equally warm; in the third, nights were much higher above normal than days, making the daily temperature range narrower than normal by 4°. The only cool spells having temperatures below normal were in the third week of March and the last week of May. All three frosts of this season came in the final week .
Rain came in five episodes, spaced a week or two apart. There were 12 rain days, which is the usual number, but the highest reading was only 20.8 mm.

This was the warmest autumn in this short record. Daily maximum, mean, and minimum temperatures were all more than 1.5° above the average for the decade beginning March 1999. The subsoil temperature at 750 mm was also rather high.
The composite Moisture Index was normal, rainfall being a little low and cloudiness rather high (36%, when the autumn “normal” is 25%).
The total rainfall of 88.3 mm was below the autumn average of 134 mm, and in the 35th percentile.

For a time around the 20th of April, days averaged five degrees colder than normal. At that time nights were warm, making the daily temperature range a remarkable eight degrees less than normal. On three occasions the dew point (humidity) was down by six degrees or more: early and late in March, and in mid-May. The sub-soil temperature was low most of the time by up to half a degree, but ended one degree high. Rain fell in each fortnight. The number of rain days (19) was high, but the highest daily reading (26 mm) was normal.

This autumn, like the last, was moist. The rainfall, at 137.5 mm, was a little higher (on the 60th percentile) and the mean daily temperature range was a new record narrow value of only 14.0°. The season was very cloudy, with 41% cloudy mornings, but did not beat last year’s record 48%. The early morning dew point, 7.2°, was not even up to normal (8.5°). Warm nights and cool days made the mean temperature normal.

Temperature, including subsoil at 750 mm, and other data are from 3 Monash Street, Manilla.