In 2015, seventeen years after my house was built, I added a small walled courtyard.

The walls of the courtyard give privacy and secure the property boundary, but that is not why I built it. Manilla’s climate has temperature extremes, with a hot dry summer and cool winter. My aim is to improve summer cooling and winter warming of the house. I may not succeed. I will monitor the performance of the courtyard, and experiment with modes of operating it.

The courtyard extends along the south side of the house against the walls of the bathroom, kitchen, laundry, and master bedroom. It occupies a narrow space to the property boundary, taking in an existing roofed patio at the back door. 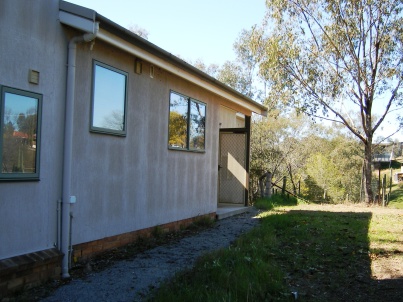 The courtyard and the house are on the crest of a ridge that is 6 metres high and 100 metres wide. The ground slopes downhill to the east and west.

The yard is 13 metres long and encloses an area of 33.3 square metres. It forms two narrow triangles along the skewed property boundary. About one third of the area is below either the house eaves or the fly-over roof of the patio.

The courtyard wall is 1.8 metres high (at a minimum), and is built of two courses of “Slimwall” panels. These panels are a fibre-cement and polystyrene sandwich 50 mm thick. There are two matching gates, which fit closely between their gateposts. When the gates are closed, the air inside the courtyard is separated thermally from that outside. Air can mix only by passing over the top of the wall.
The wall is painted on the outside to match the pale colour of the house (“Shadow Box”), and on the inside white to reject solar radiation. Little heat can pass through this polystyrene wall. 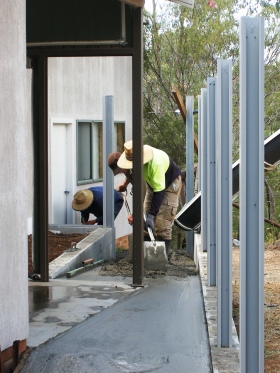 To take foot traffic, much of the courtyard floor is concrete paths. Including the existing patio floor, the concrete area is 23.6 square metres. A lot of concrete blocks are exposed near floor level as well.
Two areas of floor, totalling 9.7 square metres, are not concrete but a mulch of coarse sharp-stone gravel. The gravel layer is 70 mm thick. Below it, there is a sand layer 60 mm thick, covering stony sticky clay soil. On top of the gravel is an organic mulch of gum-tree debris. These gravel areas adjoin the house walls and are well shaded.

Warming and cooling this house

This is a high-mass solar passive house. It is suited to the climate in Housing Zone 4 (Hot dry summer, cool winter) of the Australian Building Codes Board. The design evens out daily and annual cycles of temperature, using shading, insulation, gap sealing, thermal mass, winter solar gain, and ventilation on summer nights.

Operation of the courtyard

The Courtyard Through The Western Gate

For several hours after summer sunrise, the courtyard walls shade the yard and the walls of the house. This adds to the shade provided by patio awnings and a eucalyptus tree planted for that purpose. Unfortunately, when the sun is near the zenith, solar radiation strikes the floor of the courtyard, both directly and after reflection from the white walls. The concrete then gets very hot, but the gravel does not.
The courtyard also shelters the house from the wind. The sheltering is reduced if the courtyard gates are held open. It is not clear whether the wind in summer has a heating or a cooling effect.

To cool the air at night

The house has always been cooled in summer by admitting cold outdoor air at night. Cold air replaces air inside the house that has been warmed during the day. Through the stack effect, the warm air rises through open clear-story windows, with the flow assisted by a fan from midnight to 6 am. To date, night air has been admitted to the house by opening the doors of the laundry each night at 9 pm and closing them at 7 am. I have now installed a louvre window in the wall of the kitchen to admit night air automatically. It opens at 10 pm and closes at 8 am.

The courtyard is intended to provide air that is colder than it would be without a courtyard. Two methods may work.

Through the night, solid surfaces cool as they radiate heat up to the clouds, which are cold, or to space, which is extremely cold. In Manilla, which has little cloud in summer (or in winter), surfaces usually get as cool as 17 degrees before the summer sun rises. The air near the ground is cooled to that temperature.
Air cooled in this way will flow down a slope (katabatic flow), and will pool at a low point (a frost hollow) unless it is heated.
The roof of the house is a surface that cools by radiation. Parts of it with a total area of 88 square metres slope down at 18 degrees towards the 33-square metre courtyard. Due to the installed insulation, the roof gets as cold as other surfaces at night. Cold air then flows down to be trapped. Without the courtyard, it would continue down the hill to be lost. The courtyard becomes a reservoir of cold air that can flow into the house through the new louvre vent.
Initial data suggest that this process is disrupted by the warmth of the concrete parts of the courtyard, which retain absorbed solar heat throughout the night.

According to Baruch Givoni (Search: “givoni soil cooling by mulching cover”. One viewing only!), in hot dry conditions a shaded mulched soil surface can be cooled to depth by irrigating it. Cooling of 7 degrees was observed.
I hope that the gravel-mulched soil areas in my courtyard can be kept much cooler than other nearby surfaces by this method. The soil is moister than in other garden areas. That is due to the lack of plants that would take up water, to the house’s shade reducing evaporation, and to overflow from the tubular roof gutters during storms. Since summer is the more rainy season, soil moisture is commonly high here when cooling is required. If the gravel-mulched soil should happen to be dry in spring, I have surplus rain-water to irrigate it.

[Note added August 2019.
Due to the record-breaking drought, the courtyard soil was extremely dry through last summer (DJF).The 10,000 litres of water now remaining in the 30,000 litre rain-water tanks must be reserved for domestic needs.]

[A 2016 mid-winter analysis of temperatures in the main (nearer) part of the house showed a daily maximum room temperature of 21° and minimum of 14°. To raise both, especially the minimum, would improve the comfort. According to the Adaptive Comfort Zone, 17.5° is the minimum for comfort here in that season.]

In winter, this courtyard space is largely in shadow. For most of the morning, however, some upper parts of the white courtyard wall catch sunlight and reflect it towards the house. As planned, some winter sunlight penetrates under the sloping fly-over patio roof. The patio awnings are removed in this season.
Although the house walls are insulated, some of the solar radiation now caught in the courtyard will warm this cold side of the house, particularly through the concrete floor slab and brick perimeter footings.

In addition, I am fitting mirrors of aluminium to the courtyard walls to direct sunlight back towards the house.

Some of the heat radiating away from the house on winter nights will now be intercepted by the courtyard wall. Although the white surface does not reflect heat nearly as well as it reflects light, the board has so little mass over the insulating core that it will absorb very little. The wall surface will come quickly to the same temperature as the house wall and radiate the heat back again, preventing heat loss in that direction.
Provided both gates are shut, air cannot carry heat away downslope as it normally would. Heat will be lost from the courtyard floor by radiation but not by convection.
Having the gates shut also reduces the wind which, in winter, almost always carries heat away, by day as well as by night.

The courtyard operates in a complex way. The processes may not happen as I intend. To discover what works and what does not, I have set up thermometers and begun a program of experiments. I will report results as they come to hand.

[Note added August 2019.
Temperature and humidity records have now accumulated for nearly four years from October 2015. They are tabulated, but the calibrations are yet to be entered.]

When I enclosed the area outside the windows of the kitchen, bathroom and master bedroom, I restricted the views from these rooms. The wall was built high to trap a reservoir of air, but the height was limited by regulation to 1.8 metres. I had the top of the wall built at eye level as seen from indoors. While that restricted the view, it concealed unsightly things. Over the top of the wall one can still see many trees and roofs, and houses on higher ground.
As a bonus, the plain white courtyard wall is very pleasant to look at, like a cyclorama. The pattern of sunlight changes constantly, with shadows cast by the angles of the roof and the foliage of trees.
When curtains or blinds are open, the rooms are pleasantly lit from the south with light reflected from the courtyard wall.

You can see all photos on this topic with full descriptions in the gallery “House Photos 2016”.

I introduced the topic of this page in a blog post “My heat-control courtyard” of  21 July 2016.

This blog includes some dozens of posts about the way that this solar-passive house performs. There is an indexed list of them at the bottom of “My House Page” in this blog.

In August 2017 I added a post about wicket gates that were fitted next to the solid gates in the courtyard gateways.

To invite discussion of how courtyards can affect indoor and outdoor climate of houses, I opened a thread “Courtyards for Climate Control” on the forum of the Alternative Technology Association (ATA) (now “Renew”) based in Melbourne.