Moistures (moist is at the bottom)

Latest smoothed anomaly values (March 2019) all show a retreat from the extreme drought values of the summer of 2018-19.

Temperatures were near normal, with a number of warm nights. There was just one very cool day that reached only 14.8°. The first 30° day of spring came on the 14th. The early morning dew point on the 17th, minus 10.5°, was the lowest September value, but far from the lowest recorded recently.
There were eight rain days, but the highest reading was only 3.6 mm, on the first day of the month.

Despite being within an extreme drought, moisture measures this month were not very low; not as low as in September 2017. While the mean temperature was normal, the daily temperature range was low, which is unusual in a drought.
The rainfall total of 12.5 mm (estimated) is at the 18th percentile for September.
I have reported the shortage of rainfall in another post: “Record 15-Month Drought in 2018”.

Data. A Bureau of Meteorology automatic rain gauge operates in the museum yard. From 17 March 2017, 9 am daily readings are published as Manilla Museum, Station 55312.  These reports use that rainfall data when it is available.  The record was again defective in September 2018. No 9am readings were recorded. I have substituted my non-standard gauge readings for all days.
All other data, including subsoil at 750 mm, are from 3 Monash Street, Manilla.

Like last month, climate anomalies were in retreat from drought. All moisture measures, except rainfall, moved lower on the graphs. Both the daily temperature range and the percent of cloudy mornings recovered from extreme values.

The latest fully-smoothed data point is that for March 2017.
At that time, the climate was warm and almost static, after a minor peak in aridity. Although later anomaly values (only partially smoothed) are subject to noise, three of them have raced away towards aridity: dew point fell, daily temperature range rose, and daily minimum temperature fell. 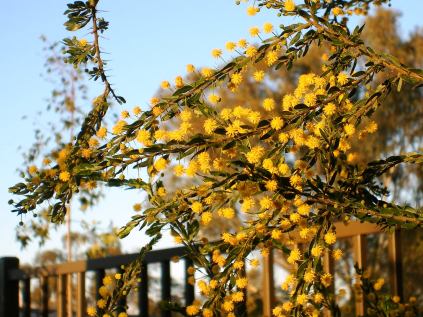 There were fourteen rainy days in a month that ended no warmer than it began. The month of September normally warms up by nearly four degrees. This time it remained near 14° all month. Some plants encouraged by the plentiful moisture were discouraged by the cold.
The highest daily rainfall reading, 28.8 mm on the 14th, hardly compares with one of 71.1 mm in 2005, or even one of 40.0 mm in 2011.
No days were warm. For the first time in this 18-year record, no September day reached 25°. More days than ever (18) were below 20° but not one was as low as 15°. Temperatures at night were near normal. A frost on the 5th was the only one. It may have been the last of the year, about a fortnight earlier than usual.
Only four mornings this month had no cloud, while seven were totally overcast.

For monthly average temperatures, the daily maximum of 19.7° stands out as a record low, 4.1° below normal. Three indicators for moisture reached their extreme September values for the new century: rainfall, percentage of cloudy mornings (63%), and (narrowest) daily temperature range (12.0°). Dew point (6.0°) was just above normal, but very much higher than in September months since 2010.
The monthly rainfall total of 122.4 mm (amended) was one of the four highest ever September readings. The others were: 1917: 124 mm; 1949: 126 mm; 1998: 166 mm.
There are not now any noteworthy shortages in rainfall totals for any number of months, up to 360 months (thirty years).

Data. Rainfall figures for this month are from the automatic rain gauge at Manilla, published on the internet by the Bureau of Meteorology as Station 55031. All other data, including subsoil at 750 mm, are from 3 Monash Street, Manilla.