By 11.30 reflected sunlight floods into the patio.

In my blog post “Mirrors to reflect the sun“, I described sun mirrors I put up to reflect winter sunlight to warm my house in NSW, Australia. They were just sheets of cooking foil taped to a north-facing courtyard wall, and I had to remove them each summer.
Now I have better and stronger mirrors: hinged panels that function winter and summer. In winter they reflect sunlight, and in summer they give shade.
These simple hinged mirror panels should improve the indoor climate due to my “Heat Control Courtyard“. Compared to heliostats (see links in a Note below) they are cheaper and will not set the house on fire!

This post is also available as a PDF file My better sun mirrors.

These are “aluminium composite bonded panels (ACP)” of rigid cellular expanded polystyrene (EPS) (20 mm) bonded between two layers of aluminium (less than 0.5 mm). One aluminium surface has 97% reflectance; the other is pre-finished in shades of green using a fluoropolymer resin paint system. [Cost of five panels: $230.]

The fragile FoilBoard insulation panels had to be stiffened with frames of aluminium angle, corner brackets, and braces of aluminium strip. [Cost: $380.]

I had the panels mounted on ten “hinges” that allow them to be held in two positions:

(A) flush against the courtyard wall to reflect the sun to the house in winter, or

(B) raised above horizontal to provide shade in summer.

These are standard hardware items called “Whitco Window Stays”. [Cost for ten: $430.] Here, they operate as hinges, using friction to secure the mirror panels at any angle. [I must thank my builder, Keith Freeman, for selecting and using them in this way.]

As soon as the work was done, I set the mirrors to provide summer shade until the end of February 2020. Then I re-set them to reflect winter sunshine until now (2 September 2020).

Because the effect of the mirror panels depends on the seasonal path of the sun, I took separate sets of photos in June, to represent the eight winter months (March to October) when they acted as mirrors and in February, to represent the four summer months (November to February) when they acted as shades. Photos of hinge details were taken in February. 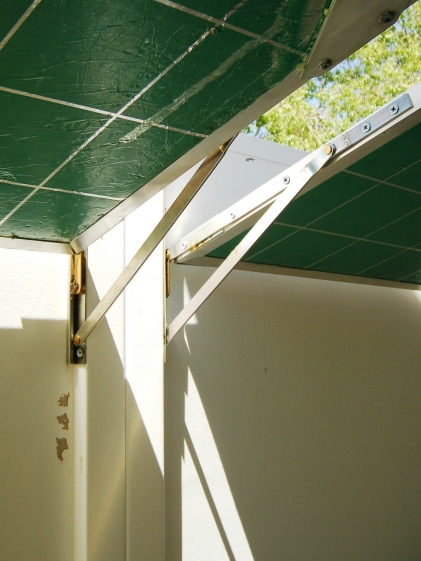 These window-stay hinges are set to support both panels to give summer shade.

These window-stay hinges are set to support panels for winter warmth on the left, and for summer shade on the right.

END_OF_DOCUMENT_TOKEN_TO_BE_REPLACED

I have begun to warm the shady side of my house with reflected sunlight in winter.

The first photo shows the present temporary set-up, done on the 10th of March 2017. That is, soon after I had changed the house from its summer regimen (to keep cool) to its winter regimen (to keep warm).
As shown, I attached aluminium foil to the courtyard wall on the south boundary of my block. The foil forms mirrors that reflect winter sun onto the south wall of the house, the edge of the floor slab, the footings and some nearby concrete paths.
The mirrors are sheets of aluminium cooking foil (“Alfoil”) 300 mm wide, cut to 900 mm lengths. I attached the foil to the wall in vertical strips with double-sided tape. As the wall is 12.6 metres long, the total mirror area is 11.3 square metres.

By 11.30 reflected sunlight floods into the patio.

I have now replaced these mirrors of cooking foil with much improved sun mirror panels.
See the new post “My Better Sun Mirrors”.

[Note added October 2019.
Winter 2019.
During 2019, I arranged to have new mirrors installed, made of aluminium-faced “Foil Board” insulating panels 20 mm thick. Mounted in frames, these would be more robust, and would have the advantage of providing shade in summer.
These new mirrors are not yet installed. Consequently, temperature data for winter 2019 is all in the category “without mirrors”.]

Last year, during April and May (2016), I attached only 17 strips of foil 700 mm long in the same way. The total area then was 3.6 square metres. In that winter, the wind did a little damage, which I taped over. Much worse damage was caused by a magpie-lark attacking his reflection. By October, they were torn as shown in the third photo.

I repaired some of that damage, too, using builders’ foil, which is stronger. On 6 November 2016, I removed all the foil. By then I wanted shade. not sunlight.

Effect of the mirrors

The white-painted courtyard wall reflects nearly all the sunlight it receives. However, this is diffuse reflection, going equally in every direction. Only a small part of it goes to points likely to warm the house.

The aluminium foil reflects in a specular (mirror-like) way, sending nearly all of the solar energy downward at the same angle that it arrived. Because the foil is wrinkled, these mirrors spread the beam of sunlight out to about twice the width of the mirror surface. It is still quite concentrated as can be seen in the last photo, which is lit mainly by reflection from the foil.

Light reflected from these aluminium mirrors is not aimed precisely at points where it would best warm the house. The mirrors are not mobile, and their location owes a lot to chance. Furthermore, the house shades the mirrors for parts of each day; different parts as the season changes.
However, I think the warming effect will be useful, and I hope to be able to measure it.

The mirrors are part of the Courtyard that I have described in posts and pages listed in “My House Page”.

I raised the question of mirrors to reflect sunlight in a thread titled “Reflective Film” on a forum of the Alternative Technology Association in Melbourne, now re-named “Renew”. (I posted as “Catopsilia”, my first post being the 15th from the top.)