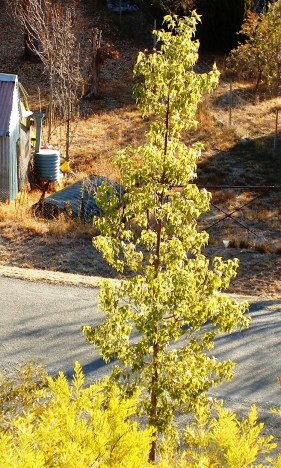 There were warm spells at each end of the month. Between them, fine cool weather was marked by black frosts with temperatures down to -4.6°. That is colder than had been seen in the sixteen years since 2002. With the freezing nights came extremely low early-morning dew points that beat the previous record value of -10.0°. The new dew point record set on the 22nd was -11.4°.
Six days had light rain. The wettest, on the 6th, registered only 3.2 mm (estimated).

Despite two nights being below -4°, the number of frosts (17) was normal, as was the mean daily minimum temperature (1.8°). Days, however, set a record mean maximum of 19.2°, making the daily temperature range (17.4°) very high. Other variables were also typical of drought: both cloudy skies (only 19%), and the early morning dew point (-4.0°) were record low values for July. This month was very like July in the drought year of 2002.

The rainfall total of 8.6 mm (estimated) was at the 12th percentile. Persistent low monthly rainfall values have carried the 3-, 4-, and 5-month totals down well below the 1st percentile that marks extreme rainfall shortage. Other totals now classed as “severe shortages” include the six-year total.

The rainfall shortages that have now become extreme are covered in other posts, such as “Drought Fifth Month: July 2018”.

Data. A Bureau of Meteorology automatic rain gauge operates in the museum yard. From 17 March 2017, 9 am daily readings are published as Manilla Museum, Station 55312.  These reports use that rainfall data when it is available.  The record was defective for July. Ten daily readings were missing. In addition, 1.0 mm was registered on the 20th when no rain or dew was seen. I have substituted my non-standard gauge readings for all days of July.