A very long spell with no rain

My town, Manilla NSW, may be having one of the longest periods without rain in 133 years. We will never know.

My gauge not valid for Manilla

The photo shows my personal rain gauge. It is dusty because it has been dry for the last 43 days.
Whether it rains in my gauge today or not, my reading cannot count in the record for the town of Manilla. It is as if it is this dry spell is not happening.
My gauge is very simple and not precise. It is hard to read to parts of a millimetre. I bought a cheap one, because there is no point in having a precise rain gauge in my yard. The yard is too sheltered to meet the Bureau of Meteorology standard. My house is also a kilometre away from the Post Office.

Rainfall was first recorded at the Manilla Post Office in March 1883. The record of readings was essentially unbroken through 132 years until the 26th of March 2015. There are towns with longer rainfall records, but not very many.
The last observer was the former Postmaster, Phil Pinch. When he left the district a year ago, no volunteer was found to  observe Manilla’s rainfall. For this failure, the people of Manilla should be deeply ashamed. We dropped the ball, in a game where our performance was recognised, not just locally but nationally.

The climate is changing. We know this only because people, mainly volunteers, have kept careful accurate records decade after decade. The reason that there is so much uncertainty about the climate of the world is that long and reliable records, such as Manilla’s rainfall, are so very few.

“Event attribution capabilities would be improved with better observational records, both near-real time and for historical context. Long homogeneous observed records are essential for placing events into a historical context and evaluating to what extent climate models reliably simulate the effect of decadal climate variability on extremes.”

Picking up the ball

This already year-long gap in the Manilla record will make it harder to use Manilla data in the future. However, if the record can be restarted before too long it will keep most of its value. “Get on with it, Manilla!”

[Note added 12 April 2019.
The automatic rain gauge at Manilla (Museum), station 055312 was faulty through the winter of 2018, the height of the current major drought at Manilla. It failed completely in September 2018 and has not yet been re-instated.
The post “March rain leaves drought extreme” documents the current situation in a note: “The rain gauge failed”.]

[Note added November 2019.
The Manilla (Museum) automatic rain gauge, Station 55312 was re-activated on 20 July 2019, and has functioned without fault for the four months to date.] 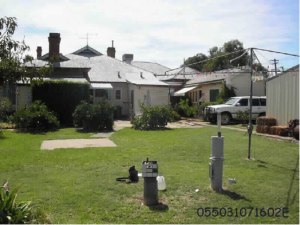 A 2007 photo of the official rain gauges at Manilla Post Office. It was received in a word.doc from the Bureau of Meteorology NSW Regional Observations Section on 2 April 2015, with advice on the selection of a replacement site.
The caption:
“Photo of both rain gauges at Manilla Post Office (taken 2007). The automatic flood warning gauge to the right. Both are embedded (dug in) to ground approximately 20 to 30cm deep.”

2 thoughts on “No rain, and no rain gauge”