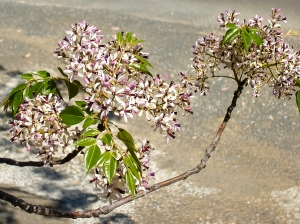 The month began with a warm spell, which was followed by a cool spell about the 15th. It ended with a long hot spell, 4.8 degrees above normal, including the hottest October day this century (38.1°) on the 26th. As usual, there were no frosts.

Of three rain days (usually seven), only the 14th had much rain: 26.4 mm, with heavy showers.
Half the mornings had no cloud at all, and nine days had very wide temperature ranges, greater than 20°.

This was the hottest October month at Manilla in this 16-year record. Maximum, mean and minimum temperatures were all highest values, but the maximum was no higher than in October 2007. The subsoil temperature returned to a value below normal.
As indicators of low moisture, the daily temperature range was very high and cloudiness and dew point were very low, as in the last two October months. Even less cloud had been seen in 2002 and 2004.
Recently, lower rainfall occurred in October 2002 (15.0 mm), 2012 (12.6 mm), and 2013 (15.0 mm). However, this month’s total of 27.0 mm is well below the October average of 58 mm, in the 21st percentile. Since last month, little has changed in rainfall totals for periods of more than one month. There is still a serious shortage in the 6-month total (8th percentile) but not now in the 9-month total (10th percentile). The 15-month total has advanced to severe (4th percentile), while the 18-month total has retreated to serious (5th percentile). A serious shortage has also appeared in the 30-month total (8th percentile).