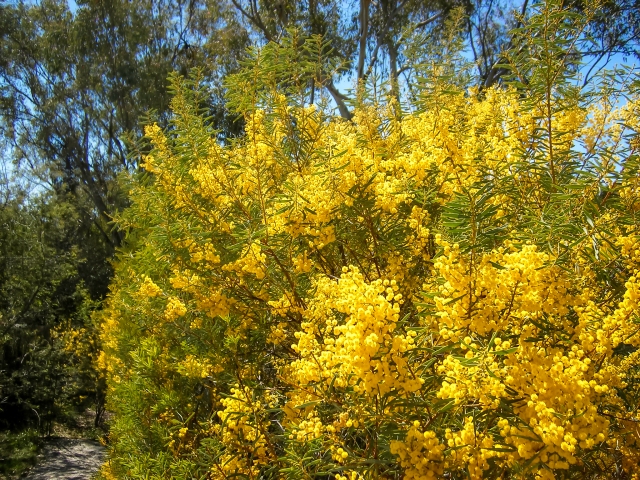 A hedge of western golden wattle

Two 5-day cool spells began on the 2nd and the 17th. Days and nights were both three or four degrees cooler than normal. At the same time, the air was very dry: a new lowest September dew point of minus 8.1° came on the 19th.
At other times, temperatures were near normal. There were four frosts (normally three). There were four rain days, which is normal.
The first thirty-degree day since mid-winter came on the 30th. At Manilla, it often comes near the spring equinox (September 22nd). In the 21st century, the first thirty-degree day came as early as August 23rd in 2009 and as late as November 9th in 2010.

Last September had been the warmest in this century. While not cold like September 2004, this month was half a degree cooler than normal. Like September in 2003, 2007, and 2012, it was both cool and dry. By contrast, the cool Septembers of 2010 and 2011 were wet, affected by La Nina.
Cloudiness and daily temperature range were near normal, but the mean dew point (1.4°) was not much higher than the extreme low value (0.6°) set last year.
The total rainfall of 18.8 mm is in the 26th percentile, well below the September average of 41 mm. Totals for periods of more than one month now have serious shortages for six months (7th percentile), nine months (7th percentile), and fifteen months (5th percentile), and a severe shortage for eighteen months (4th percentile).