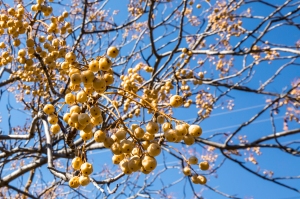 This winter, there were no very warm or very cold spells. There was one sunny spell with a wide daily temperature range in early August, followed by a week with a narrow temperature range.
There were 38 frosts. While this is below the 16-year winter average of 44, it is near the average for the last seven winters. From 2001 to 2006 the winter average was higher: 47 frosts.
Rain fell on 15 days (normal), with a highest reading of 26.6 mm, which is also normal in winter.

Seasonal means and totals were all not far from normal except for the dew point. The dew point of 0.7 degrees was more than two degrees low, showing extremely dry air, as in winter 2012. The daily minimum temperature was almost a degree high, reducing the temperature range and raising the mean temperature as well.

The winter rainfall total of 106 mm is just below the average (125 mm) and in the 40th percentile.

Data. Rainfall data is from Manilla Post Office, courtesy of Phil Pinch. Temperature, including subsoil at 750 mm, and other data are from 3 Monash Street, Manilla.